This Christmas I didn’t do much giving or receiving of gifts, which was a nice change as I am actively trying not to accumulate more possessions (abandoned vintage typewriters notwithstanding, of course). The few I did receive were very precious, such as this hand-thrown yarn bowl from Shireen: 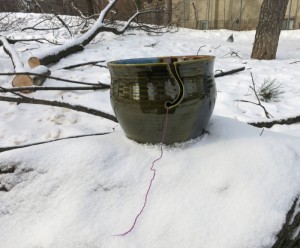 Now what is a yarn bowl, you may ask? Simply put, it’s a vessel for holding a ball or cake of yarn to keep it from rolling away and getting tangled while it’s being worked with. Put the cake in the bowl, run the end of the yarn through the slit in the side, and there you have it.

Shireen has only made a few of these bowls, which became quite popular for a while after being featured by the Yarn Harlot. Given the amount of work that goes into each one, she stopped making them for sale, but a lucky select few have received them as gifts. 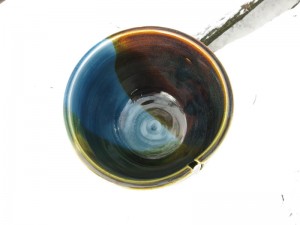 My first project to make use of the yarn bowl will likely be Rock Island, a rather late Christmas (or, early birthday) gift for my SO, using the Renaissance Dyeing yarn I picked up in Montreal. 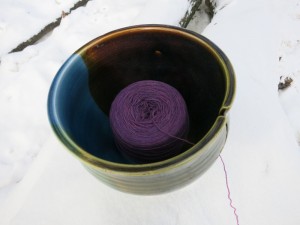 I love these colours, especially in winter.

Everything looks a bit washed out these late December days–white sky, dull grey snow, with the monochrome currently broken up by the heaps of broken branches from the ice storm.

Good day to stay in and knit before the festivities tonight. Happy new year!

This entry was posted in yarn bowl. Bookmark the permalink.